The history of bladder stone removal is both long and stomach-churning. Also known as calculi, the Latin word for “small pebbles,” these stones have plagued countless victims since the dawn of humankind. The earliest known bladder stone was found in the pelvis of a mummy at El-Amrah in Egypt; it is estimated to be 5,000 – 7,000 years old. Bladder stones even managed to find their way into the Hippocratic Oath: physicians must swear that they “will not cut for the stone, but will leave this to be done by practitioners of this work.”

Early pioneers of bladder stone removal, or lithotomy, struggled with various methods to relieve their suffering patients. The ancient Indian doctor Sushruta, for example, recommended a vegetarian diet and a urethral injection of milk in hopes of avoiding an agonizing and oftentimes deadly surgery. Egyptian physicians working at around the same time were said to have exercised a rather cringe-inducing lithotomic procedure: a wooden cannula, roughly the size of a thumb, would be forcefully thrust into the urethra. Meanwhile, the stone would be pressed down into the perineum via fingers inserted in the rectum until it could be sucked out of the cannula by the doctor’s mouth.

Cornelius Celsus, a Roman physician working around 25 BCE to 50 CE, developed a removal technique that would remain in use until the 1600’s. He advised that a “strong and intelligent” man should place two oily fingers into the patient’s rectum, guiding the stone toward the neck of the bladder. An incision would then be made on the left side of the perineum and the stone pulled out through the wound. Celsus cautioned that this surgery should only be performed in the springtime. Obviously, his procedure was excruciating, and it often had long-lasting consequences. If they managed to avoid a deadly infection, patients often experienced a permanently damaged rectum and lifelong incontinence.

In the Middle Ages, surgeons began to experiment with various lithotomical devices. Marianus Sanctus Barolitanus, inventor of the Marian procedure, made use of various knives, iron bars, and forceps to tear through the prostate and remove the stone. Of his instruments, he remarked:

“Look but to the aperiens, how it gapes with desire when the conductors have made way for its approaching, and, seizing the stone, it rages like a ferocious soldier ready to enter the breach in the walls of the besieged city. Next come the voracious and vociferous forceps themselves, which often, when their morsel is too large for them to devour, cry out for the aid of their two supports, the latera, which are then laid side by side with the forceps.”

The problem of a “too-large morsel” was a frequent encounter during lithotomies, and was especially troublesome because these types of surgeries were meant to be kept as short and as non-invasive as possible in order to avoid the very common and dangerous complications that they often resulted in. At the beginning of the 19th century, fragmenting or crushing instruments were introduced so as to reduce the size of the stones. These “lithrotrites” or “lithoclasts” almost immediately reduced the mortality rate of lithotomy from 25% to 2.4%. The Museum has a lithoclast in its collection—the Gouley’s lithoclast, which conveniently acts as two tools in one: forceps at one end and a sharp-toothed stone cutter at the other. Manufactured by George Tiemann & Company, Gouley’s lithoclast was introduced around 1890. Its advantages include a smaller incision size and reduced risk of hemorrhage. 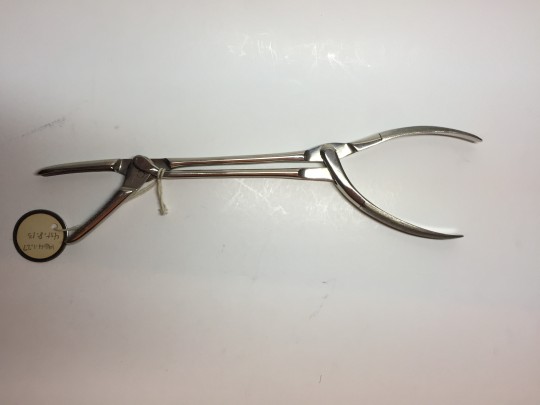 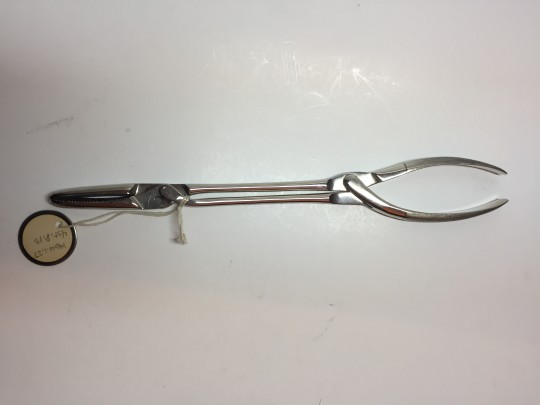 Modern lithotomies are much less frightening than they once were. Technologies have emerged that allow for a minimally invasive procedure with incisions no longer being necessary—calculi can even be broken up with a laser, called a cytoscopic laser lithotripsy, after which the fragments naturally pass through the urethra. This dramatically reduces the pain felt by the patient and his or her recovery time. Today, if you are unlucky enough to develop a bladder stone, you can rest easy knowing that you won’t encounter a cannula or a ghoulish Marian device in your recovery process.

Sally Monroe is the current Collections Intern (Permanent Collection) at IMSS and a graduate student in the Museum and Exhibition Studies program at the University of Illinois at Chicago. She is interested in the intersection of cultural spaces and representations of pain.