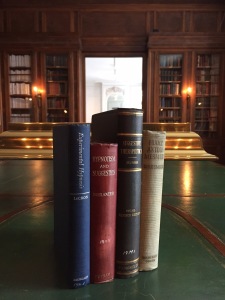 Viewing large collections, such as the Thorek Library, is a wonderful way of visualizing how ideas in medicine change and morph into standards that we know today. During the museum’s last Rare Books Conservation Workshop, the conservation team and I were amazed by the literature on Syphilis, diseases of children and some beautiful 17th century German texts that were found that day. We were especially excited to find three books on Hypnotism. They included Hypnotism and Suggestion in Daily Life, Education and Medical Practice by Bernard Hollander (1910), Experimental Hypnosis by Leslie M. LeCron (1952), and A Handbook of Suggestive Therapeutics, Applied Hypnotism, Psychic Science by Henry S. Munro, M.D. (1911).

All three of these books provide differing viewpoints on hypnotism, each reflecting on the author and the time. When referencing the dates of the books and topics discussed, the connections the authors were making at the time and the connections that had yet to be made were apparent. The library also contains a biography of Franz Anton Mesmer titled, Franz Anton Mesmer: A History of Mesmerism by Margaret L. Goldsmith (1934). Mesmer, is notable for being the first in Western history to discuss the connection of mind and body through his interest in animal magnetism. For many, this is the direct link to hypnotism and later modern psychology.

Franz Anton Mesmer (1734-1815) was a German physician who, in 1774, started using magnets in his medical profession. Mesmer was working attempting to heal a woman by having her drink an iron-based liquid before he moved magnets over her body. This supposedly healed her for a couple of hours. While many others were incorporating magnets into their profession at the time, Mesmer recognized that something else was in play for the healing of this woman. Mesmer attributed it to animal magnetism, a phrase that he coined for the force or energy within living beings. Anton stopped using magnets in his work, and for the rest of his life concerned himself with how to use animal magnetism as a tool for healing.

His process included redirecting or breaking blockages within the body so that this animal magnetism could flow. This was achieved by the practice of Mesmer placing his hands on places of his patient’s concerns. The patients, through feeling the intensity of animal magnetism, would reach a hypnotic state. While hypnotism or hypnosis had yet to be coined, this was called mesmerism. Mesmer is our namesake for the term “mesmerized.”

Varying responses came after Mesmer’s animal magnetism, from skeptics to fanatics. By 1843, others were trained and practicing mesmerism. James Braid, a well-known surgeon, stumbled upon a demonstration on mesmerism by a third party. Although known for his treatment of clubfoot, Braid was taken by the mesmerism and began practicing himself. However, he had many frustrations with mesmerism and introduced various changes in the profession. As a result, Braid’s change of direction pulled the field into a more serious medical sphere.  For one, mesmerism focused on the agency of the practitioner, whereas Braid chose to create a more patient-focused practice.  By distancing the practice away from a power-holding practitioner, a more democratic approach was established. After these changes, it was easier to investigate animal magnetism within a science-based approach, rather than the “quack-science” that mesmerism was often labeled. The final distancing away from Mesmer was Braid coining the term “hypnotism.”

Since its Western inception, hypnotism has continued circulating in various social and medial spheres with a varying range of reputation. These books are a wonderful example of seeing how medicine and ideas of the body change and adapt over time. While Mesmer bordered between entertainer and physician, he has left few remarkable changes in medicine. However, the thoughts that he introduced to the medical field are far-reaching. Mesmer can be seen as the beginning of the west recognizing a mind and body connection, leading all the way to modern psychology.

As Margaret Goldsmith introduces Mesmer in Franz Anton Mesmer: A History of Mesmerism, she writes, “Though Mesmer himself is not generally remembered, his interpretation of animal magnetism marked the beginning of mental history as we understand it today. He himself was not a man of sufficient vision to bring his ideas to their scientific conclusion, but he was a great man or as an English scientist has pointed out, ‘it requires a genius to create a subject as a distinct topic of thought” (Goldsmith, 2-3). While this mind/body connection is present in other types of medicine (in many cases eerily similar to ideas of Qi in Traditional Chinese Medicine), Mesmer is one of the first in Western medicine to acknowledge this connection.

Although Mesmer’s practice was unconventional and controversial, his ideas on animal magnetism began a major and continual shift in our ideas about the body.  This position between entertainer and physician, nurtured space for these controversial ideas—leading to major changes in medical history. When we place these positions in history close to one another, such as in our library, it is easy to see the thread between faulty scientific exploration and a whole field of study, and to truly appreciate Mesmer for his ingenuity.

All of the books on Hypnosis discussed in the Thorek Library are available through later editions. Although, the original Suggestive Therapeutics, Applied Hypnotism, Psychic Science can be found in its entirety at: https://archive.org/details/39002086414472.med.yale.edu

Monica Stokes is a Chicago-based artist and researcher interested in archives, medicine and sympathetic systems. She is currently Collections Intern – Thorek Manuscripts and Rare Books Collection at the International Museum of Surgical Science.